“Mommy, daddy’s birthday is coming up! What are we going to make him?”

She said “we”, but that usually means me.

“Do you guys want to make it this year? Just a little cake for the three of us to share with dad?”

“Of course.” I would come to regret these words later.

We decided on a sour cream butter cake with dark chocolate frosting. And sprinkles. 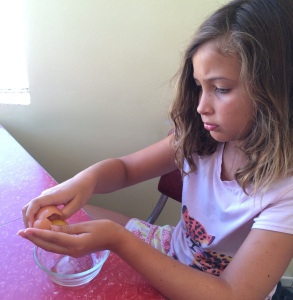 They proudly cracked open eight eggs in order to get a total of four whole yolks. I fished out the shells from the rejected mix of broken yolks and whites and put the blended eggs into a jar to save for breakfast the next day.

A bit of sour cream and some vanilla were added to the egg yolks, then the kids took turns weighing the cake flour and sugar.

They measured the remaining dry ingredients and everything was sifted together into the bowl of my KitchenAid.

Sifting became a two-person job, slightly messier than one, but pretty efficient.

Finally, they each buttered and floured a six-inch cake pan.

This is another two-stage cake recipe from Rose Levy Beranbaum. I really like using this mixing method because a) it results in a very tender cake, b) it’s fast and nearly foolproof, (the most time consuming part is measuring the ingredients), and c) kids, (see b).

Softened butter and more sour cream went into the bowl with the dry ingredients and mixed together until just moistened.

We cranked the speed up to medium for a bit, then began adding the egg mixture in three additions. 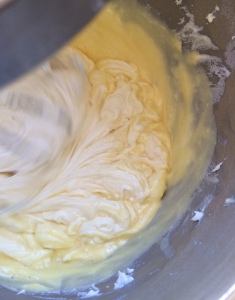 The kids really enjoyed seeing the transformation from yolky soup to fluffy cake batter in a process that took barely minutes.

I helped them portion the silky batter into the pans, then we popped the cakes into the oven. 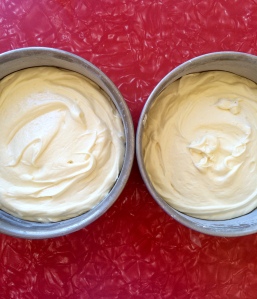 While the cakes baked, we turned our attention to the chocolate filling and frosting.

I chopped the chocolate while my daughter heated the cream to simmering. She poured the hot cream over the finely chopped chocolate and we let it stand for a few minutes before she whisked it until it was shiny and smooth. 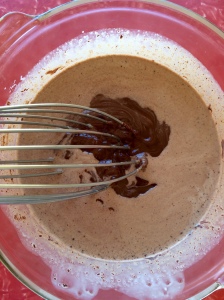 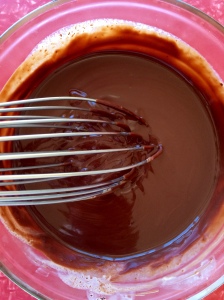 The keys to baking and pastry? Timing and temperature. We now had a still warm cake from the oven, and a ganache that needed to firm up a bit. Lunch break.

After everything was close to optimal temperature, we started assembling the cake. I like to cut the tops off my cakes to make them as level as possible. Also, you get to eat the scraps.

We placed one cake, cut-side up, on the turntable, then topped that with a dollop of ganache. We smoothed the chocolate out to the edges of the cake with an offset spatula and added the second cake, cut-side down. 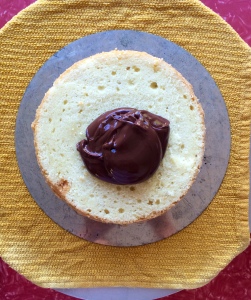 Then the real mess-making began.

I showed the kids how to hold a flat icing spatula in their dominant hand and dip it into the bowl of ganache resting on the opposite side.

Using their other hand to rotate the turntable, they scooped up small amounts of ganache with the tip of the spatula and pressed it against the sides of the cake, sliding the spatula back and forth to spread the ganache evenly, (sort of). I resisted every instinct I had to jump in and smooth it out, or at least mitigate the flinging of chocolate, but they stayed on task and did a very fine job. When they had had enough, I tidied up the sides and evened out the top.

Another key to pastry work? Decorate to hide mistakes! We had some crumbs mixed in with the frosting, so the kids opted to cover the entire cake with sprinkles.

They also covered the table, the floor, the dog…

But they were so happy with the results! And they were beyond excited to present it to their father, who was just as happy to eat it.

Preheat the oven to 350 degrees and butter and flour the cake pans. In a medium bowl combine the yolks, 1/4 of the sour cream, and the vanilla. In the bowl of a standing mixer combine the dry ingredients. Add the butter and the remaining sour cream and mix on low until everything is just moistened. Increase to medium speed and beat for 90 seconds to develop the cake’s structure. Scrape down the sides. Gradually add the egg mixture in 3 batches, beating for 20 seconds after each addition. Scrape down the sides and place the batter into the prepared pans. Smooth the tops of the cakes with a spatula. Bake for about 35-40 minutes or until a toothpick inserted in the center comes out clean and the cakes spring back when pressed lightly in the center. Let the cakes cool in the pans on a rack for 10 minutes before removing. Let cool completely before frosting.

Place the chopped chocolate in a medium bowl. Bring the cream to a simmer and pour it over the chopped chocolate. Let stand for 5 minutes, then stir until the chocolate is smooth. Let the ganache cool at room temperature, without stirring, until it looks thick enough to spread. If it firms up too much before you can use it, set the bowl in a pan of barely simmering water until the ganache is partially melted, then stir gently to the desired consistency.

7 thoughts on “A Cake of Their Own”