Scrape down three ounces of the best and purest chocolate, or prepared cocoa. Cut up, into a deep pan, three-quarters of a pound of fresh butter; add to it a pound of powdered loaf-sugar; and stir the butter and sugar together till very light and white. Have ready fourteen ounces (two ounces less than a pound) of sifted flour; a powdered nutmeg; and a tea-spoonful of powdered cinnamon–mixed together. Beat the whites of ten eggs till they stand alone; then the yolks till they are very thick and smooth. Then mix the yolks and whites gradually together, beating very hard when they are all mixed. Add the eggs, by degrees, to the beaten butter and sugar, in turn with the flour and the scraped chocolate,–a little at a time of each; also the spice. Stir the whole very hard. Put the mixture into a buttered tin pan with straight sides, and bake it at least four hours. If nothing is to be baked afterwards, let it remain in till the oven becomes cool. When cold, ice it.

“This is the first chocolate cake recipe ever published in America.”

I don’t know if the kids were more intrigued by the novelty of the recipe or by the main ingredient, but I did notice that at least one of them recognized Miss Leslie’s name from our last baking project.

They also knew, from a previous session, that by 1847, chocolate had been around for a very long time.

“I wonder why it took them so long to work it into a cake?”

It turns out that the method of chocolate consumption hadn’t changed much from the 16th century, when the Spaniards brought it from Mesoamerica to Spain and, by extension, to the rest of Europe.

Two hundred years later, people still drank their chocolate — hot, with milk and sugar. It was considered healthful and they drank it as often as possible despite it being very labor intensive:

A portion of one of the cakes must be scraped fine, added to a sufficient quantity of water, and simmered for a quarter of an hour; but milling is necessary to make it completely smooth. For this purposes [chocolate pots have] a circular wheel of wood or metal within, fixed to a stem that passes through the lid, and which, being whirled about rapidly by the palms of the hand, bruises and mixes the chocolate with the water. The chocolate must be milled off the fire, then put on again to simmer some time, then milled again until it is quite smooth. From the fineness there should be no sediment, and the whole should be drunk; cream is generally used with it … Sugar may be put in with the scraped chocolate, or added afterward.

We checked out some pictures of these special chocolate pots and mills.

“They had to use the stirring rods in order to keep the chocolate from separating. Cocoa beans are 53% cocoa butter, so that fat will want to rise to the surface unless you keep mixing it. Otherwise, you’d have a bit of an oil slick on top of your hot cocoa.”

I explained that the process of manufacturing chocolate was even more labor intensive than the lengthy preparation of hot cocoa — many chocolate makers still ground their beans by hand, though some used rudimentary machines or even grist mills.

“Yeah, just like that. Then, factories started popping up. The first was Hannon’s Best Chocolate in Massachusetts in 1765.”

None of the kids had heard of Baker’s Chocolate, so my story of how Hannon’s became Baker’s, which is still in business to this very day (!), was met with blank stares.

“So all this industrialization made chocolate that much more available and affordable.”

Then, van Houten’s son, Coenraad Johannes, developed a process  in which cocoa is treated with alkaline salts to reduce its natural acidity. This “dutch process” results in a product that is much darker than natural cocoa due to the chemical reaction of the salts and the cocoa.

“So when you bake with cocoa you need to pay attention to the recipe and whether it calls for dutched or natural cocoa — that tells you which leavening to use: baking soda for the acidic natural cocoa, or baking powder for alkalized cocoa.”

They examined the two powders, smelling and sampling each.

I promised that, once we got our cake mixed and in the oven, I would make sweetened pastes with both kinds of cocoa so they could have a more pleasant tasting experience.

While Miss Leslie’s original recipe called for either prepared cocoa or “scraped” chocolate, the updated recipe we were using called for grinding unsweetened chocolate in a food processor — because now we have electricity and modern appliances, and for that I am thankful.

“Can we taste the chocolate?”

I warned them it wasn’t sweetened! 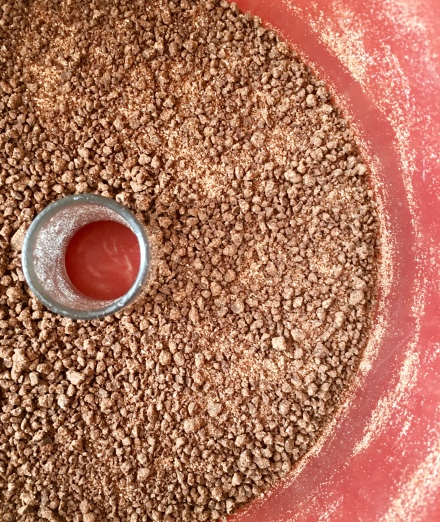 “So, Miss Leslie would have grated her chocolate by hand. She would have also mixed this cake by hand. Notice there is no chemical leavening in the recipe.”

We discussed how a cake of this kind gets its loftiness, and how much muscle would have gone into mixing it without a machine: first beating the butter and the sugar, then whipping the yolks, and finally, whipping the egg whites. Whew.

“I bet you’d have one arm a lot bigger than the other!”

Ah, but we did have a machine. And we were more than happy to use it.

“We are trying to create as many air bubbles in the butter as possible. The edges of those sugar crystals rubbing against the butter will do that.” 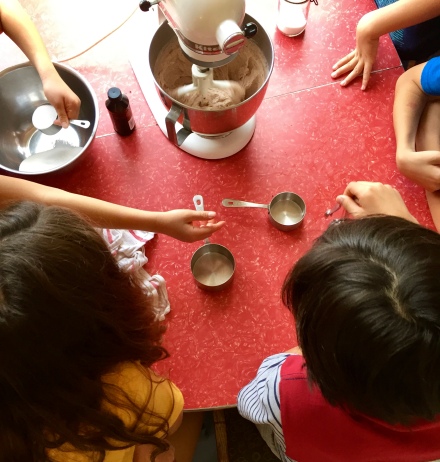 Once all the sugar was added, we continued beating the mixture for several more minutes to aerate it even further. 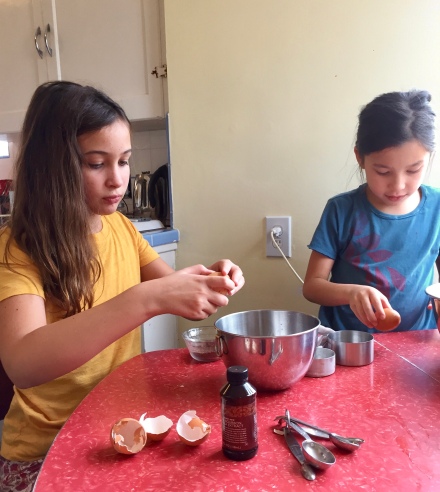 Then, they added the eggs.

I explained that the original recipe called for even more eggs because, when whipped, they act as additional leavening; since our electric mixer had the ability to incorporate a lot more air into the batter than mixing by hand, we could use fewer eggs.

And finally, they added the flour. 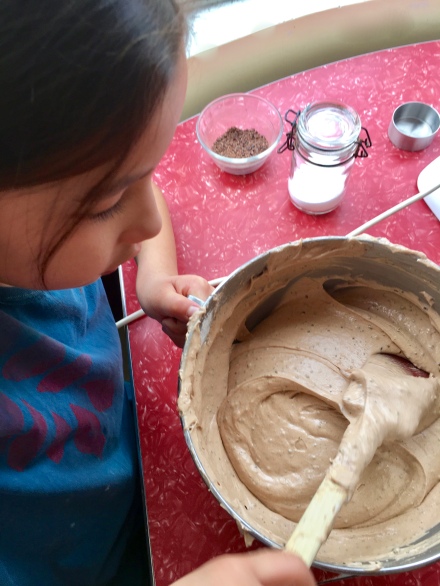 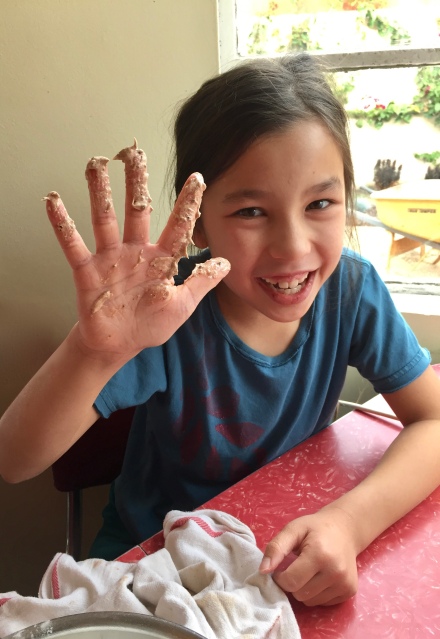 We popped the cake into the oven and the kids made short work of the mixing bowl.

While the cake was baking, I kept my promise to provide the crew with a better taste comparison of the two cocoas by mixing up a bit of each with sugar and hot water.

They were unanimous in their preference for the natural cocoa. 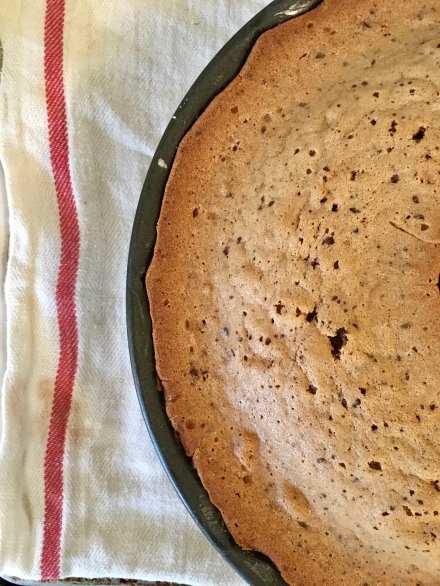 And we were all unanimous in our approval of Miss Leslie’s cake.

Whatever it was that prompted Eliza Leslie to incorporate chocolate into a pound cake recipe, we approved wholeheartedly. 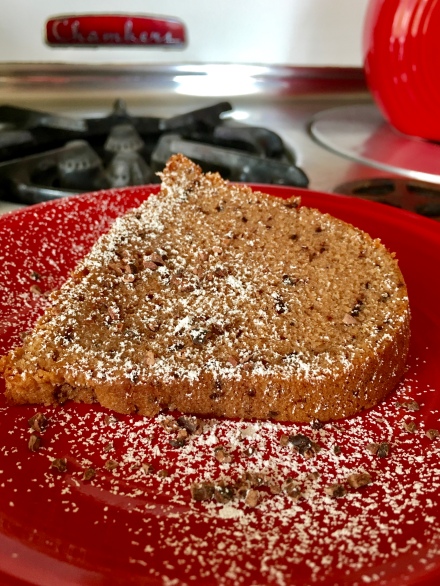 Adapted slightly from Greg Patent’s recipe in Baking in America

Adjust the oven rack to the lower third position and preheat the oven to 350 degrees F. Butter and 10-inch (12 cup) bundt pan and flour it, set aside.

Place the cake flour, salt, and nutmeg in a bowl and whisk to combine.

Process the chocolate with 1/4 cup of the sugar in a food processor until the chocolate is chopped into very small granules and set aside.

Beat the butter in a large bowl with an electric mixer until smooth and creamy. Add the ground chocolate mixture and vanilla and beat for 1 minute on med-high speed. Beat in the remaining 1 3/4 c sugar about 1/4 cup at a time, beating for 20 to 30 seconds after each addition.

When all the sugar has been incorporated, beat for 5 minutes.

Beat in the eggs two at a time, beating for 1 minute after each addition; stop to scrape the bowl and beaters occasionally.

On low speed, gradually add half the flour mixture, beating only until incorporated. Beat in the milk, then the remaining flour. Use a rubber spatula to finish folding the mixture together.

Spoon the batter into the prepared pan and gently shake it to level the top.

Bake for 55 to 60 minutes, until a toothpick inserted into the thickest part comes out clean. Cool the cake in its pan for 20 minutes.

Gently loosen the edge of the cake from the pan and cover it with a wire rack. Invert the two and carefully lift the pan from the cake. Let cool.

For more on this historical cake series:

Cake As a Lens

I Vote For Cake

Redemption of a Sad Paste

Chocolate Cake For a Devil, Hold the Sauerkraut

9 thoughts on “Chocolate and Elbow Grease”