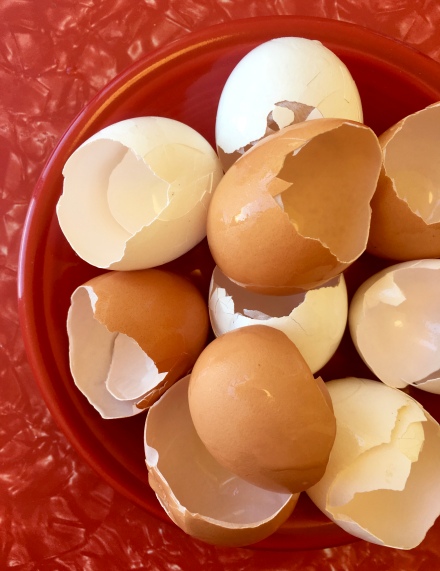 My son watched as I cracked open a dozen and separated the whites from the yolks.

“Well, if we were having this conversation in a kitchen during the 19th century instead of in this kitchen today, we’d have a lot of chickens. Lots of chickens means…”

I can’t say I was surprised when none of the kids could definitively say that they’d eaten angel food — even though it’s a classic cake, its popularity seems to have waned. They only recognized it after I showed them a photo.

“Why do they call it angel food?”

I explained that this simple cake made of only six ingredients, baked up so light, white, and fluffy that people claimed that it was “fit for angels.”

It’s harder to pin down the origins of the cake. Perhaps it is a variation of one of the already existing egg white cakes: the Lady Cake, Silver Cake, Sno-Drift, or even a version of a white sponge. Angel food differs from those in that it is made without a trace of butter or oil; the cake is completely fat-free.

“So it’s healthy!” I joked. The kids knew better.

Another theory is that prudent members of the Pennsylvania Dutch community, unwilling to see perfectly good food go to waste, created the cake to use up the leftover egg whites on noodle making days. Scans of early 1800’s newspaper ads from southeastern Pennsylvania show offers for the tube pans used in baking angel food cake.

“If the Pennsylvania Dutch had been baking a version of this cake since the early 1800’s, why didn’t it become widely popular until the second half of the century? The first published recipe for Angel Food Cake is from 1878.”

The 1856 patent of a simple yet ingenious invention probably had a lot to do with it. 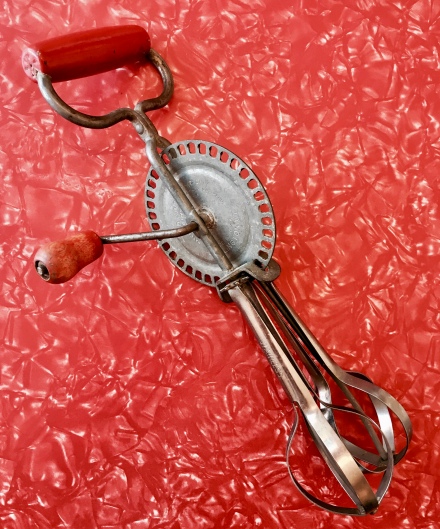 Prior to the 1850’s, bakers would have had to whip their eggs by hand with a fork, a slotted spoon, or even a tree branch, (the Shakers thought that a branch from a peach tree imparted a peach flavor to the cake). The rotary eggbeater made whipping a dozen egg whites so much easier!

We took a look at an amazing collection of these mechanical devices. 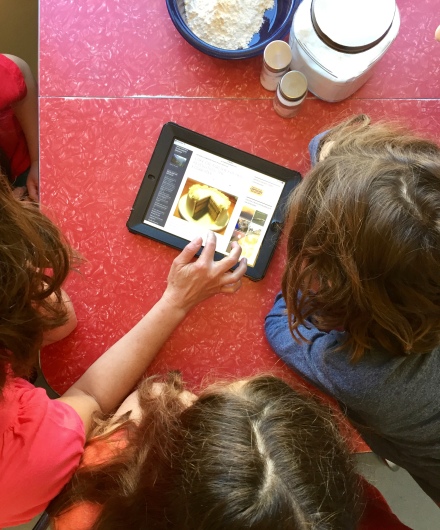 Now I know I am partial to vintage kitchen stuff, but some of the old beaters were downright beautiful in design.

One more contribution by the world of industry popularized angel food cake — the mass production of baking pans. Swan’s Down (1894) even offered tube pans to customers as a gift with a purchase of cake flour.

Now there was no reason not to bake an angel food cake!

Because the mixing of this cake proceeds quickly, it is best to have all the ingredients scaled out before beginning to whip the egg whites. 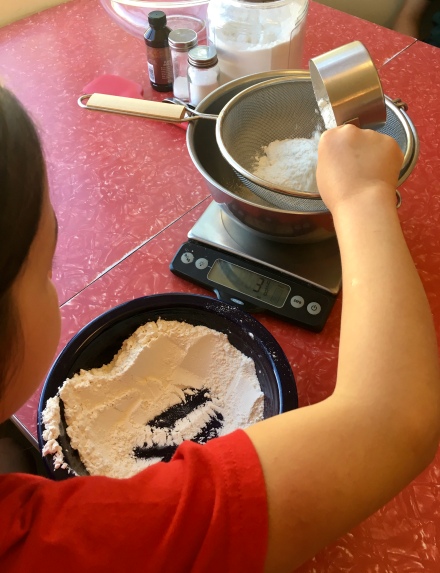 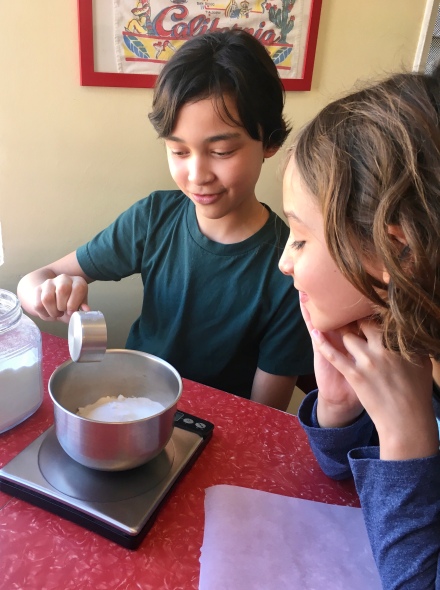 Using superfine sugar and sifting the dry ingredients a couple of times ensures that the cake will be nice and light. 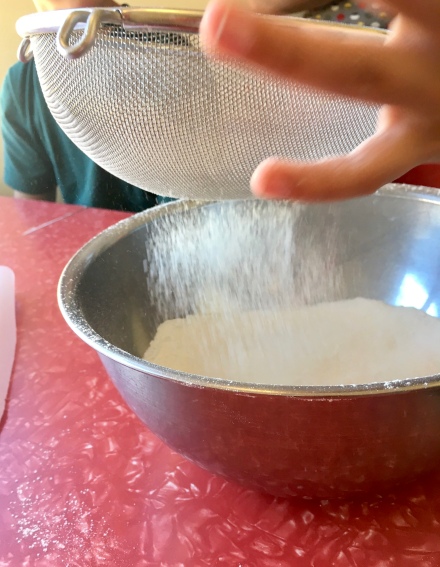 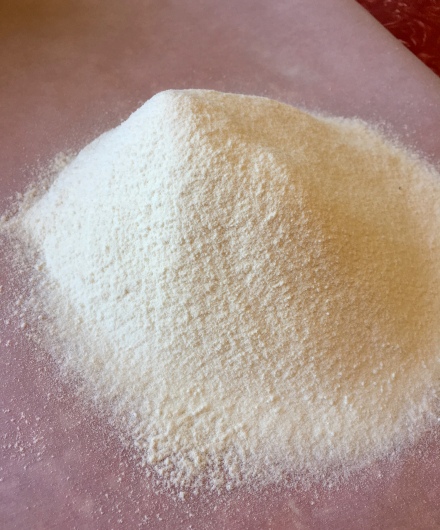 We reviewed the rules for success when whipping egg whites:

There should be no trace of egg yolks in the whites.

The beaters, bowl, and/or whisk should be squeaky clean — any grease or fat will keep the whites from whipping.

Room temperature whites will whip to a greater volume than cold whites — you can gently warm them over hot water or a low flame.

Avoid over whipping the egg whites and sugar — look for a soft serve ice cream-style curve to the peak rather than a pointy and stiff peak. 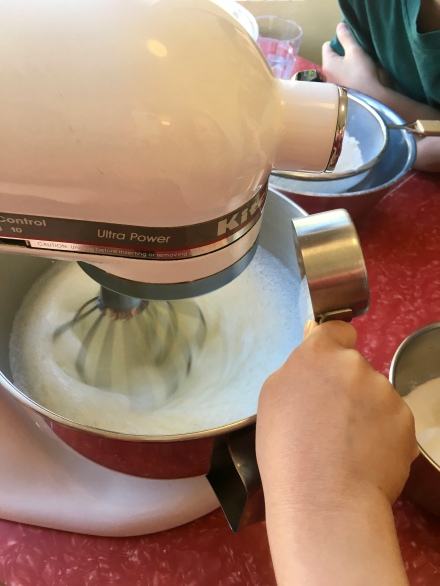 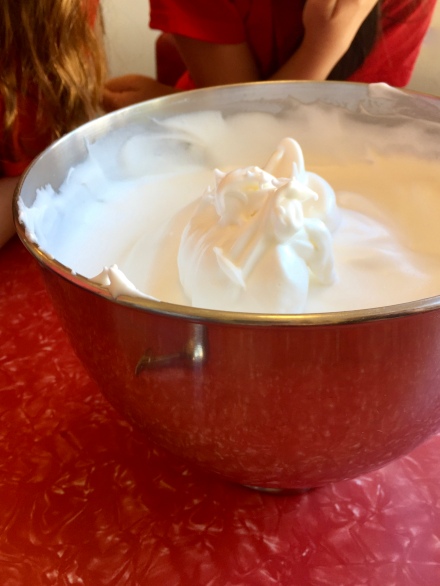 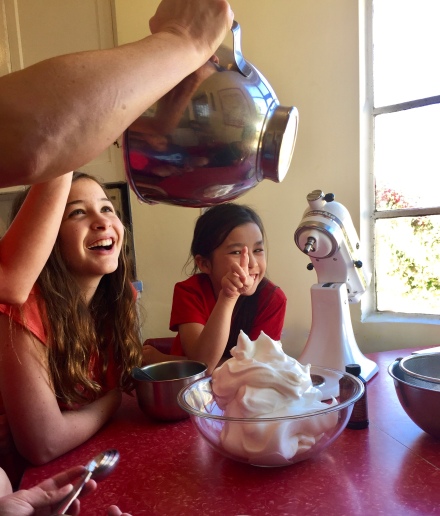 Once we had a smooth and billowy meringue, we scooped it into a large bowl so that we would have enough room to fold in the dry ingredients. 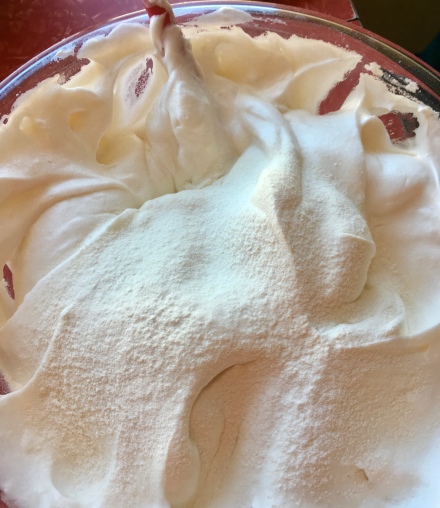 “Down through the center, up the side…” 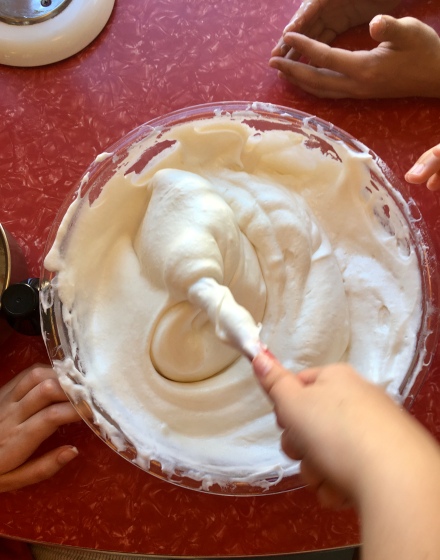 Angel food batter needs to cling to the sides of the baking pan, so there was no need for the usual greasing and flouring. This is also why non-stick pans are not suitable for angel food cakes. 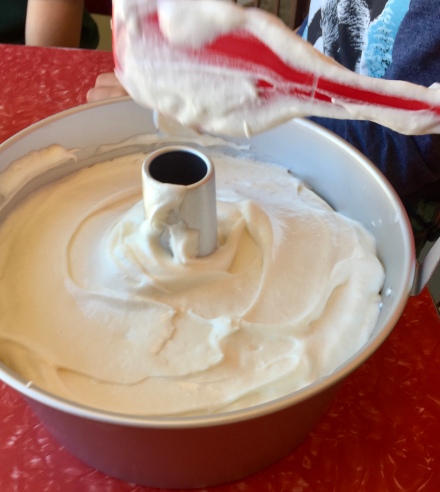 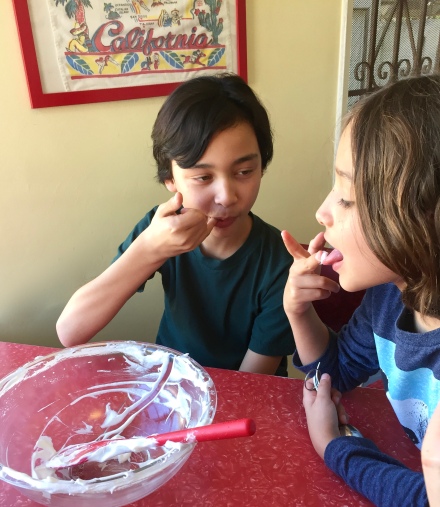 Because the cake has no fat, I usually like to balance it out with a richer topping. Also, I had twelve egg yolks in the fridge.

A sabayon is always easy, impressive, and delicious. We chose to make use of the red grapefruit and cara cara oranges we had in the fruit bin. 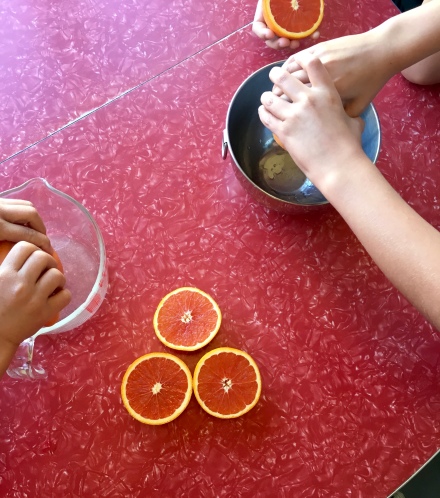 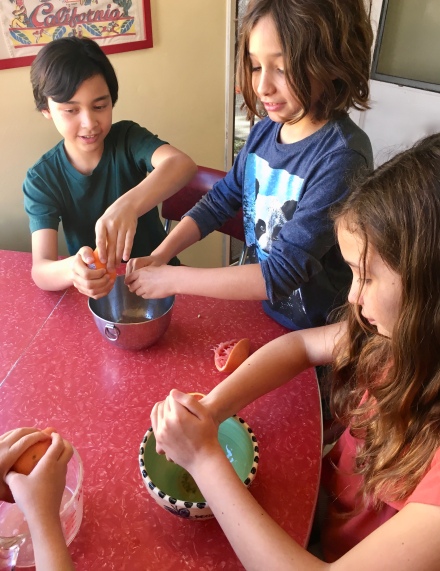 Second French word of the day: bain marie, also known as a double boiler. The kids took turns whisking the egg yolks, sugar, and citrus juice together over the simmering water until the sauce was thick. 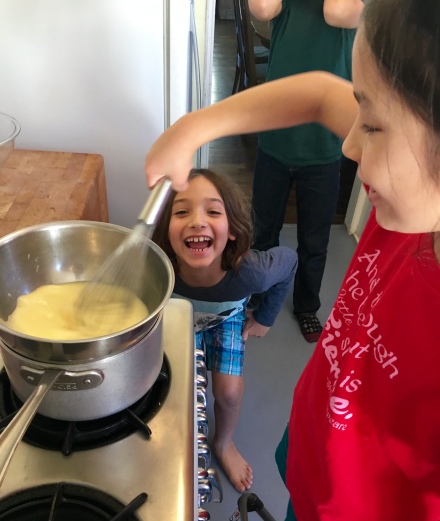 We knew it was ready to come off the heat when we could make a ribbon with the mixture. 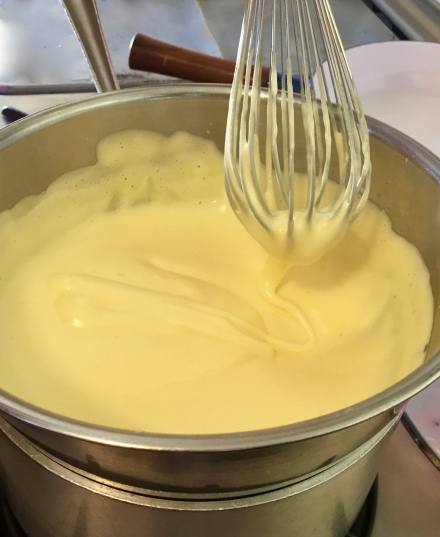 Whisking the sabayon until it is completely cool will keep it from deflating or separating. I added a little bit of whipped cream to the sabayon because I like it that way. Did I mention that there is no fat in the cake? It’s all about balance. 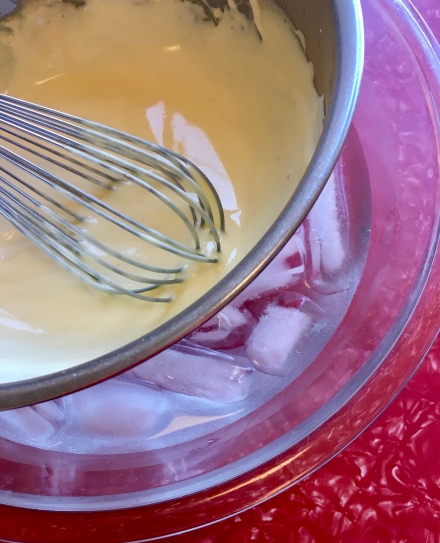 Angel food cake should be left to cool, upside down, to set the structure. Our pan had feet for this purpose; the whole thing looked a little like a UFO. 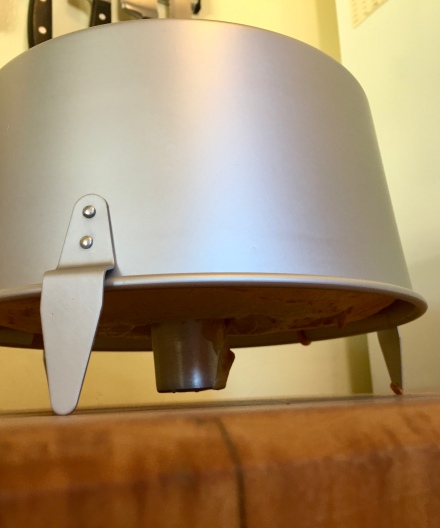 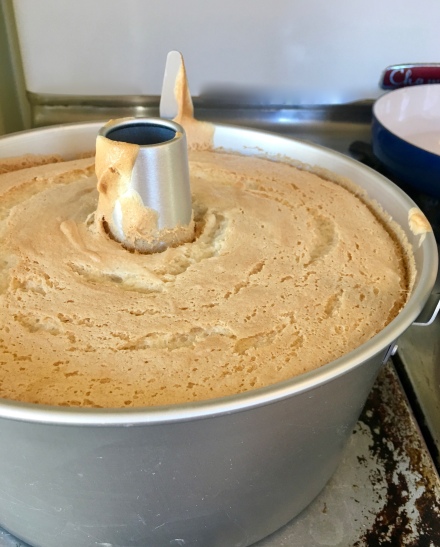 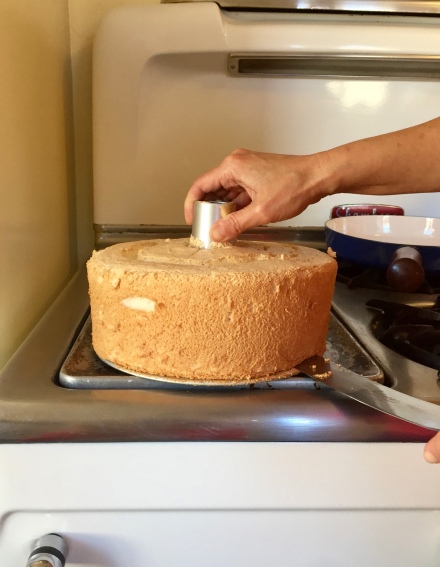 I don’t know if our cake was fit for angels, but it was definitely fit for an angel of a birthday boy. 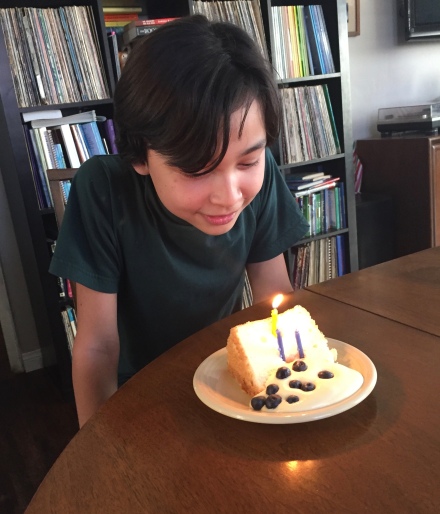 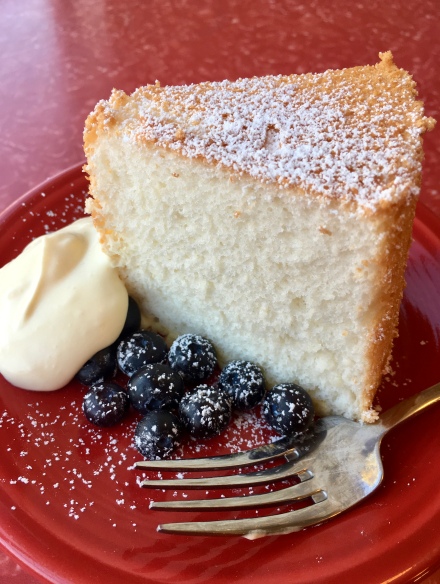 Place the flour and 3/4 cup of the sugar together in a sifter set over a bowl or a piece of parchment. Sift a couple of times and return the mixture to the sifter. Set aside.

In the bowl of a standing mixer or a large mixing bowl, combine the egg whites, salt, and extract. Whip until the mixture is just frothy, then sprinkle the cream of tartar on top and continue beating until the mixture forms soft peaks.

Gradually add the remaining sugar, a few tablespoons at a time, and continue beating to just shy of stiff, glossy peaks. There should be a little curl to the tip, like a soft serve ice cream cone. Sift 1/3 of the flour mixture over the meringue and fold the two together until the flour just starts to disappear, then repeat the process two more times.

Spoon the batter into the pan. Run a skewer or thin knife through the mixture to break up any large bubbles. Bake the cake for 40 to 45 minutes, or until it’s golden brown and the top springs back when lightly touched.

Remove the cake from the oven, and set it upside down on the pan’s feet or with a bottle through its center cone. Let the cake cool for as long as possible around four eager kids.

Loosen the edges of the cake with a knife, and remove it from the pan.

Use a serrated knife to cut into slices.

1/3 cup of sugar, (more or less to taste depending on the sweetness of the juice)

Whisk to blend the yolks, juice, and sugar in a stainless-steel bowl. Rest the bowl in a saucepan over hot water. Whisk constantly for 4 to 5 minutes or until it has the consistency of lightly whipped cream. Clear the bottom of the bowl constantly with the whisk so that the eggs do not scramble, and adjust the heat as needed. When thick, foamy, and tripled in volume, remove from heat. Over an ice bath, continue whisking until cool. Whip cream and fold into sabayon.

For more in this historical cake series:

Cake As a Lens

I Vote For Cake

Redemption of a Sad Paste

Chocolate Cake for a Devil, Hold the Sauerkraut

11 thoughts on “Fit For Angels”