“The last time we were together we talked about first civilizations and Mesopotamia. Do you guys remember how people settled near the rivers there and started cultivating plants for food?”

“The Tigris and the Euphrates! They grew wheat there!”

“Right! Now we are moving east, to China, where people also settled near rivers. Anyone know which rivers those are?”

While they had a hard time identifying the Yangtze, they did remember that the people of the ancient civilization in the Yellow River Valley grew rice in the fertile soil near the perpetually flooding river.

Growing rice requires a lot of water, but millet, a naturally prolific crop in China, does not. The fast-growing, small-seeded grass thrives in warm, dry conditions, and is therefore especially well-suited for the more arid climate of northern China. In fact, scientific studies suggest that people there cultivated millet even before rice.

Some of the kids knew what millet was.

I told them all about the exciting 2005 archaeological find at Lajia, an excavation of a Bronze Age site on the banks of the Yellow River in central China.

“So, the noodles they found in an upturned bowl were about 4,000 years old!” 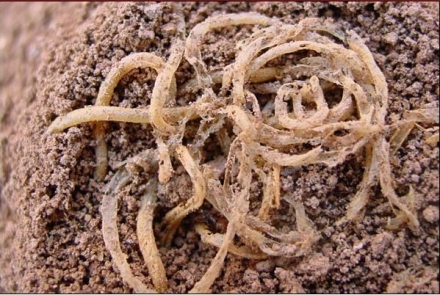 “Ewww. I don’t think I want to eat noodles anymore.”

My son is sensitive when it comes to food imagery.

I explained how the airless conditions in the bowl had prevented the noodles from decaying. Scientific analysis proved that they were the same age as the excavation site and were made from both foxtail and broomcorn millet.

“So, this provided some evidence in settling a long running argument about the origin of noodles. The earliest record of noodles in China was written sometime between AD25 and 220. Up until the find at Lajia, the question of whether noodles were first invented by the Italians, the Arabs, or the Chinese, had still been up for debate.”

There seems to be an endless variety of Chinese noodles: cut, extruded, flicked, pulled or kneaded, and even shaved. Yet the most basic are made from a simple combination of starch flour, water, and sometimes salt.

We checked out a video of a cook making shaved noodles, and then another fascinating video about the art of making 9-foot long noodles by hand.

“The Lajia noodles were thought to be similar to a pulled type called la mian — la means to stretch, and mian means noodle.”

I showed them yet another impressive video of a la mian noodle master.

La mian noodles are made with flour derived from wheat; the gluten in wheat provides the plasticity and elasticity required for the repeated twisting and folding of the dough. I like to compare the process of kneading dough to straightening out a messy pile of yarn — the goal is to align the gluten strands just like one would line up the separate pieces of yarn.

“Ok, so we’re not making those. Nor are we doing a noodle dance.”

I told them they could go home and do the noodle dance in their own kitchens.

Instead, we would be making an easy pulled noodle based on this recipe.

I had mixed and kneaded the dough in advance because the gluten has to rest and sufficiently relax before it can be pulled.

I filled two pots with water, and while those came to a boil, I cut the noodle dough into strips. 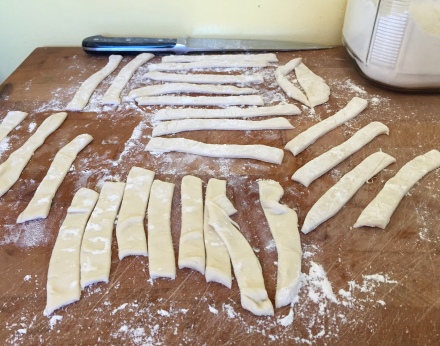 I showed the kids how to take a strip of dough, one end in each hand, and simultaneously stretch and pull it, bouncing it a little as it lengthened. Then, I took hold of one end and stretched it even more, pulling the noodle through my hands as if I were measuring out a length of ribbon.

“Long noodles are supposed to signify a long life. It’s ok if you break your noodle, but you’re never supposed to cut them.”

The kids were a bit cautious at first, but they soon got into a groove. 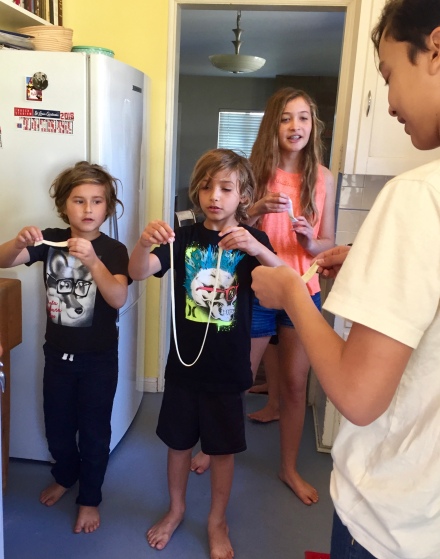 And then they started cranking out noodles like experts.

I had them stand away from the stove while they pulled the noodles, moving in only to take turns gently lowering their long strips of dough into the pots of water.

While we stretched and cooked, we talked about the importance of noodles in Chinese culture and the upcoming Chinese New Year.

“Hey, how can it be the New Year when it’s already February?”

Ah, but they already knew all about it, and informed me that the date of Chinese New Year is dictated by the lunar calendar. (I knew this)

Specifically, the first day of the new year falls on the new moon between January 21 and February 20.

“So it can be a different day every year?”

“Yep! Anyone know which animal is represented this year?”

We continued chatting, noodling, and cooking.

I fished the noodles out of the water as they finished cooking and placed them in a nearby colander set over a bowl. They stayed fairly warm until all of the rest were done, but a short dousing of hot water refreshed and reheated them enough to toss with some ginger-scallion sauce and quickly sautéed veggies.

The moment before we ate was a flurry of activity — the kids were absolutely dyyyying to eat the noodles they had so proudly stretched. I felt a little like Kung Fu Panda slinging noodle bowls onto the table in front of eager diners.

The kids further dressed their noodles with hoisin, tofu, and other assorted items. 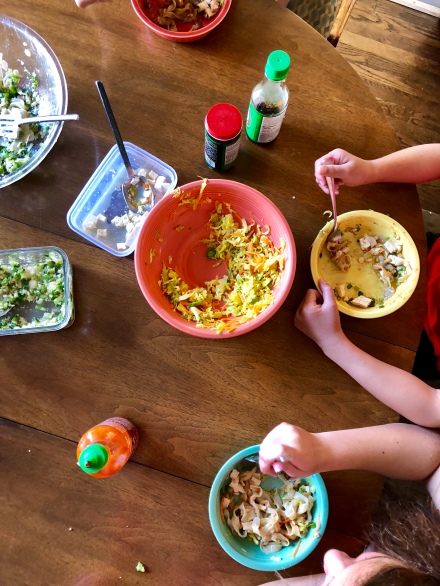 The noodles got a hearty thumbs up from all involved. My son requested that we make them again immediately. I guess the ancient noodles hadn’t put him off his lunch after all. 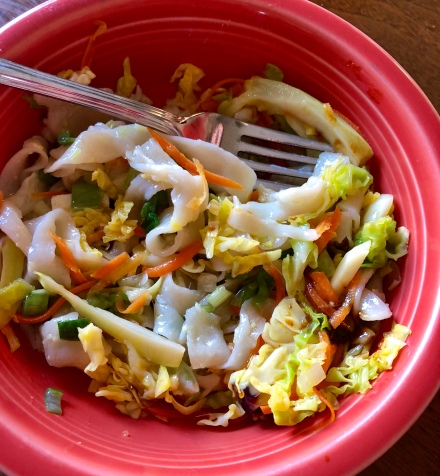 Maggie Zhu over at Omnivore’s Cookbook gives excellent and detailed instructions on making this type of pulled noodle. I followed her recipe, mixing the dough in my stand mixer for 15 minutes.

Mix the dough, cover it and let it rest for two hours, then divide it into eight pieces. Lightly coat each piece with oil, cover tightly, and refrigerate overnight. Let the pieces come to room temperature, then pat each piece into a rectangle and place on a lightly oiled sheet pan. Keep pieces covered until ready to pull.

When you are ready to cook the noodles, cut each rectangle into strips on a lightly floured board — remember that they will get thinner as you pull them! Cook them in boiling water for 1-2 minutes. They are pretty much ready when they float. Drain and keep warm.

Maggie advises bringing the water to a “roaring boil” for the most authentic chewy texture. I didn’t do this for the kids’ batch because we had so many arms and hands about, but the noodles turned out just fine. They were a bit softer than my test batch, but nobody seemed to care!

I made a double recipe of Ginger Scallion Sauce that we tossed the finished noodles in. I also quickly sautéed some shredded cabbage and carrots with some chopped garlic and added those to the bowl. We placed extra sauce, some sliced red pepper, hoisin, tofu, soy sauce, and Sriracha on the table and let each kid dress their own noodles.

This was a hit with the kids, and super fun for all involved. Give it a go and make sure you share pictures with me if you do!